"Freemasonry is a system of morality, veiled in allegory, and illustrated with symbols."

Freemasonry means different things to each of those who choose to join. For some, it’s about being able to contribute to deserving causes – making a contribution to family and society. For others it’s about making new friends and acquaintances through the largest and oldest fraternal order. But for most, it's the pursuit of the real secret of Freemasonry, "Making Good Men Better".

Freemasonry is the world’s oldest and largest non-religious, non-political, fraternal and charitable organizations. It teaches self-knowledge through participation in a progression of ceremonies. Members are expected to be of high moral standing and are encouraged to speak openly about Freemasonry. Freemasonry is a society of men concerned with moral and spiritual values. Its members are taught its principles (moral lessons and self-knowledge) by a series of ritual dramas – a progression of allegorical two-part plays which are learnt by heart and performed within each Lodge – which follow ancient forms, and use stonemasons’ customs and tools as allegorical guides. Freemasonry instils in its members a moral and ethical approach to life: its values are based on integrity, kindness, honesty and fairness. Members are urged to regard the interests of the family as paramount but, importantly, Freemasonry also teaches concern for people, care for the less fortunate and help for those in need. CHARITY

From its earliest days, Freemasonry has been concerned with the care of orphans, the sick and the aged. This work continues today. In addition, large sums are given to national and local charities. 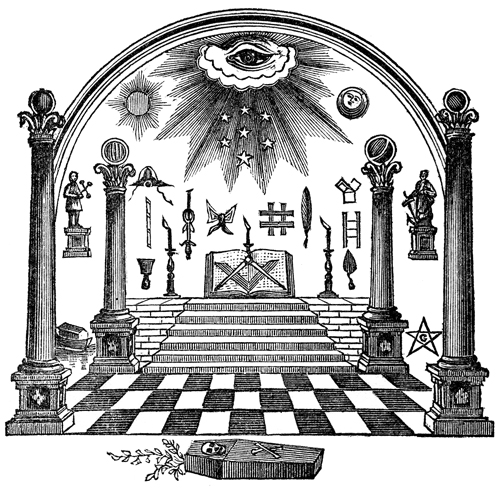 “The mason square doth clear the air of folly and deception

The rule is straight, the angle clear, for greatness has direction

By the compasses abide the points within so far and wide

No pleasure sway nor profit tempt these bounds of Mason pride

Greatness, what your virtues are good deeds practiced wide and far

For the great Book knows what man can’t hide

A life that’s measured from inside

And on that book

That oath we took

And we will break it never

A Charge To The Fraternity by Benjamin Franklin

The first charter granted in England to the Masons as a body was by authority and power of King Athelstan, in the year of 926 at York, England. That is nearly 1100 years ago. The ancient history of Masonry is for a different article altogether. For now we will focus on modern Freemasonry.

The history of modern Freemasonry begins on June 24, 1717 when four lodges met together for the first time. This occurred when the lodges gathered at the Goose and Gridiron Ale-house in St. Paul's Church-yard in London. These lodges, in an effort to work together and adhere to similar principles, created what is called a Grand Lodge. This was the formation of the first Grand Lodge, which today is known as the United Grand Lodge of England.

During medieval times, men who were skilled in building and architecture were in great demand in Europe. Their value exceeded that of the men who belonged to the property in their feudal system. These artisans needed to be free to travel to build the great cathedrals that are admired to this day. But much as the auto workers who helped the new auto industry in America during the early 20th century needed unions, these workers needed an organization that could determine their proper wages, organize their skills, and create a system where new men could be introduced to this advanced knowledge and have an opportunity to become master builders.

Lodges were formed at the each new cathedral that was built. The members would have methods of recognizing each other. That simple confirmation of identity, and therefore membership, enabled them to receive proper wages and for the cathedrals to be built in the most expedient manner by the most knowledgeable builders.

Lodges determined who their members would be. New members, generally young men, would be initiated as apprentices and spend a number of years learning their trade. After many years, the initiate would show the craft his work in a special test that would allow him to pass on and become a member of the lodge. When his skills were without question he would be a Master in the lodge. His skills were more valuable than the value the land owner placed on him. He was a Free Mason. A builder who could travel to wherever he needed to be build the magnificent cathedrals of the age. And he was accepted by all the lodges that were composed of master builders. He was a Free and Accepted Mason.

As knowledge spread and individual freedom evolved, Masons found the need for their lodges to be declining. They began to welcome men who were not actual builders, or ‘Operative Masons.’ New members came from different areas. Nobility and businessmen began to find benefits in the rich symbolism of the fraternity of builders. The fraternity began to grow and evolve. That development led to lodges forming together in London in June of 1717. Other Grand Lodges began to develop, generally specific to certain areas, such as countries or territories.

Freemasonry spread from the British Isles during the Colonial Era. All of the "original" Grand Lodges began to issue charters to individual lodges in North America. Starting in 1730 The Grand Lodge of England began to issue Warrants for Provincial Grand Lodges in the colonies. Initially, these Warrants were issued to individuals, to act as deputies for the Grand Master in a given area for fixed periods of time. After the American Revolution and, again, after the incorporation of the Dominion of Canada, the various Provincial Grand Lodges in North America were closed, and the Lodges in each State or Province formed independent Grand Lodges. These in turn, chartered lodges in the territories in the West and North. As each new State or Province came into being, the lodges that had been chartered within its borders gathered together and formed new Grand Lodges. The Grand Lodge of Georgia was established December 16th 1786.

Allegations have often been levelled on Masonry that it is a secretive organization. Let us clarify, it is not a secret society, but a society with secrets. All members are free to acknowledge their membership and will do so in response to inquiries for respectable reasons,